Over on ArabLit M. Lynx Qualey last week translated and summarised the announcements for the Etisalat Award for Arabic Children’s Literature shortlists (reposted here with permission)

There were only three books shortlisted for this year’s YA category:

Taghreed Najjar’s Whose Doll Is This, a compelling novel set between Chicago, Jaffa, and Beirut that follows the fate of a doll left behind when Arwa’s grandma fled her Jaffa home in 1948;

Fatima Sharafeddine’s Plump Mila, about a girl’s struggles with anorexia; and

Me and the Crew by Mais Dagher, ill. the acclaimed Lena Merhej, about a boy named Ibrahim who’s bullied after he discovers a secret.

“Best Book of the Year” category

With All the Love in My Heart, by Anas Abu Rahma and ill. Lubna Taha (Palestine Writing Workshop);

Damascus: The Story of a City, by Alaa Murtada (Dar al-Balsam); and

A Story about “س” and “ل,” also by Anas Abu Rahma, ill. Lubna Taha (The National Publishing House of Jordan). 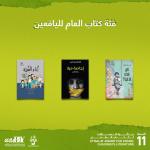 Damascus: The Story of a City, by Alaa Murtada (Dar al-Balsam);

Damascus: The Story of a City, by Alaa Murtada (Dar al-Balsam).

This was a new category and no shortlist was announced.

Prize organizers reported that this year they had received 175 submissions from around the world, and that winners in all categories — including the new “Best Silent Book” category — would be announced at the opening ceremony of the Sharjah International Book Fair 2019, on October 30, 2019.

The 1.2 million AED in prize money (approximately USD $325,000) is divided between authors, illustrators, and publishers.