‘The Book of Barni’: Bridging the Gap Between Grown-ups and Kids

Balázs, Zágoni: The Book of Barni. Translated from the Hungarian by Jozefina Komporaly. Cluj (Romania): Koinónia, 2018. 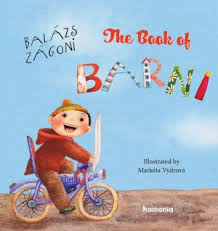 The Book of Barni was first published by Koinónia in 2005 as Barni könyve, bringing together a collection of short stories by practicing father Balázs Zágoni, and written at the request of his real-life son, also called Barni. The book presents a universe viewed through the eyes of four-year-old Barni, reflecting on his day-to-day experiences. For Barni, the world inhabited by grown-ups is simultaneously magical and hard to understand, yet at times it is extraordinarily simple – which is why he takes a number of bold initiatives, such as offering to deal with the family’s finances or going shopping on his own. He has to realize fairly soon, though, that his strategies may not work; after all cash machines do not just dish out notes for everybody, one has to actually have some money in the bank in order for that to happen!

The stories included in the volume shed light on Barni’s life in which aspects familiar to each and every child (such as bedtime routines, going to nursery, learning to ride a bike) are situated side by side to extraordinary adventures (helping dad to pour concrete, taking design decisions, relying on foreign language skills when shopping, etc.). Zooming in on the universe of a preschool-aged child, the book paints a candid portrait of Barni as a boy genuinely aiming to understand what happens in the grown-up world, and at the same time invites adult readers to engage with how children perceive them. In this sense, the book is a reliable guide for adults to the world of children, insofar as it shows the latter’s genuine dilemmas and concerns, and demonstrates the viability of treating young children as equal partners rather than attempting to educate by heavy-handedness or excessive pampering. The Book of Barni shows that children value few things more than being given recognition and being trusted with specific tasks, and that they crave explanations for potentially ambiguous situations, so they do not think that people laugh at them when they are, in fact, laughing with them. Barni is so keen to get involved with whatever his parents happen to be doing that he copies their every move, not realizing at times that he might have done something inappropriate in the process.

Having watched his dad do some DIY, for instance, Barni spares no effort in trying to fill the fine cracks in their living room wall:

Barni’s patience and empathy is seemingly boundless, so he doesn’t give up until he manages to persuade his parents to repaint an old bus, happily naming it Barnibus, and he keeps repeating the rules of the various games until his dad finally gets them and is able to play with him. Ultimately, The Book of Barni shows the success of parent-child negotiations, in which both parties are adjusting to one another at all times. So when on a Saturday morning Barni gets up really early, he wastes no time in waking his parents up using the very same routine they themselves have practiced on him all week long:

‘Mum, we have to get up early because we have loads to do: play with the building blocks and the wooden train set, play in the sand, ride the bike, play ball, and also go on a tram ride and travel up and down the escalators. There’s no time to waste!’ 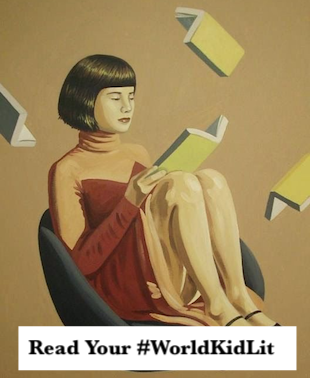 September is the month to explore and celebrate translated literature for kids & teens. This website is full of resources to help you find children’s and YA books from other countries and cultures.

How to get involved…

Why not post a #shelfie of the translated kids’ books in your collection?

Or join the #worldkidlitmonth challenge: read and review a book for young people translated into English from another language.

See the ABOUT page and the RESOURCES page for more details about #WorldKidLitMonth.

In 2020, we are launching World Kid Lit LIVE! See the EVENTS page for all the info.