Petra Dünges is one of a handful of European specialists in Arabic children’s literature and the translator of the first children’s book from Arabic to appear in the German language. Children’s books by authors and illustrators such as Walid Taher, Ihab Shakir, and Samira Shafik have appeared in her translation from the German publishing house Edition Orient. She presents books of Arab authors and illustrators, which would be interesting to children outside of the Middle East and North Africa at her website, www.petra-duenges.de/.

International publishers may ask her for preliminary translations of these books into German, for short descriptions, and for contact to the publishers of the Arabic originals. 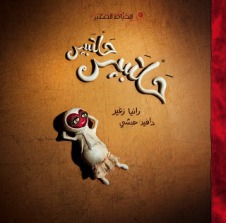 A picture book full of fantasy about the unrequited love between the shy Haltabees, an alien from the distant star Zoranees who has landed on earth, and the girl Lamees, who rejects the kind feelings of Haltabees, preferring the company of silly buffaloes instead. This sad but charming story is told in poetic language and with modern mixed-media illustrations with a Lebanese flair. For children and youth. Both author and illustrator come from Lebanon. A witty picture book by the same author with illustrations by Racelle Ishak has already appeared at Edition Orient, where it is now available in  bilingual versions in 20 languages. 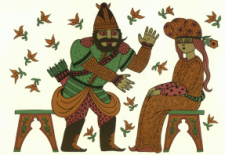 A multi-layered tale about a courageous princess who opposes her uncle, a tyrannical king. The beautiful modern illustrations are inspired by traditional oriental art. The book can be read as a suspenseful story for older children but also as a political tale for adults about peaceful resistance against an overpowering despot.  Both author and illustrator come from Egypt.

The Dreamer of Baghdad

A poor man in Baghdad keeps dreaming of a treasure in Cairo which will make him rich some day. When he arrives in Cairo to search for his fortune, he is first beaten up by police, then thrown into prison and finally interrogated by a police officer. The police officer tells him about his own recurring dream of a treasure in Baghdad, declares the poor man to be crazy as he followed an empty dream, and sends him back to Baghdad. In the end, the poor man finds his luck, when he returns home.  This story goes back to the Thousand and One Nights and beyond. It is retold for our modern times in a picture book with innovative and expressive illustrations. For the youth and for adults, for dreamers and for realists alike. The author comes from Lebanon, the illustrator from Syria.

This funny picture book with lively illustrations is a part of a series about adventures in the daily life of a little boy in Beirut. The protagonist is persuaded by his mother to eat up his disliked vegetables with the promise that he will get ice cream afterwards. Even though he eats lots of zucchini, his plate always stays full. And the phone keeps ringing all the time. What is going on? Both author and illustrator come from Lebanon.